Read part of the book 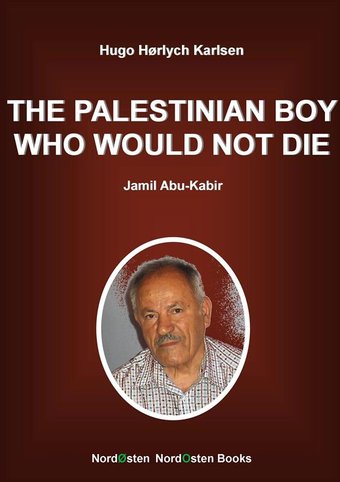 The Palestinian Boy Who Would Not Die. Jamil Abu-Kabir

NordØsten  NordOsten Books’ License Statement: This ebook is licensed for your personal reading as a printout or read on an ebook reader, tablet or PC. If you would like another person to have this book, please purchase an additional copy. Thank you for respecting the work of the author, translator and publisher.

By the same author about Palestine:

They Came to Colonize

The Intention Was to Dispossess – Zionist Quotes

The West Wants the East

The Boy and What Had Happened up till Then

“The bride is beautiful,

but she is married to another man.”

(Response about Palestine from the two representatives of the Jewish rabbis in Vienna, who went to Palestine on a fact-finding mission around 1897/98 after the First Zionist Congress in 1897 in Basel, Switzerland, had formulated the goal of colonizing Palestine.)

I remember clearly the first words he said to me, when I first met the man who does not exist. He is from the village no one can see, situated in the land without a people.

He looked into my eyes and smiling he asked:

“You want to know the truth?”

And of course I wanted to know the truth. Who does not always want to know that? So I nodded, and over the years to come he told me what really happened.

He was born in the village no one can see. Despite that, he was just a boy the way a boy is a boy everywhere on earth, though like other boys a special boy in his own individuality, in his own unique family, in the traditions of his own culture and in the land and landscape of his own people.

Let us meet the man who does not exist. Let us see him in the village no one can see, situated in the land without a people.

One early morning in spring he woke up with the rays of the sun cutting into his right eye, so he had to open it to the light, but at the same time shut it to its sharpness. But he felt the warmth on his right cheek and turned his head, so every part of his face was now lying in its warm flood. And he rose quietly, still with his eyes shut, to stand with more parts of his body in the streaming light. There was silence in the village. From the room of the house where he stood there opened a space of the kind of complete stillness that only exists when no human voices or sounds of human activity can be heard, but, like now, just the scraping of the chickens in the sand outside and the braying of a donkey in the outskirts of the village.

He sneaked out like so many boys have sneaked out in the morning to spend some time on their own with no grown-ups around to watch over them and comment on their doings or not-doings. And he stood in the sun. The wind was chilly; there was still a touch of iciness in it that crept through his shirt. But the sun was warm already; it penetrated the invisibility of the cold air and soothed his skin and blood where the beams hit him. He found shelter from the breeze behind a garden wall. And suddenly everything was nothing but warmth and pleasurable smells from the houses, the gardens, the fields of the village and the open landscape with its soft hills and valleys opening his eyes to the horizon. And inside him, behind the eyes he closed once again, he saw the river near the village flowing by; he felt the cool water whirl around his bare feet as it had done so many times since his early childhood, when he went there for water or to play with the others kids.

A few hours later he screamed. A scream that made him feel like an explosion inside, with all his feelings, thoughts, veins and blood and inner organs being whirled out into a universe of complete despair – for the scream remained inside his body for fear that the foreigners who were shooting at him would be able to hit his soft flesh and fresh young blood with their lethal bullets more easily if the scream passed over his lips. His body was on fire as it hit the cool water of the river, and the bullets sounded like angry bees in the air around him and like fierce slaps when they hit the water and trees. The water closed over him.

Because he was a Palestinian boy. To a foreign group called Zionists he was a boy who did not exist, who lived in a village that was looked upon as if it was not there, who lived in the land of Palestine, which was a country where all the many villages, towns and farms and Bedouin communities were non-existent entities in the eyes of this foreign group. The rich Palestinian land and culture had in the course of many centuries brought about three of the world’s main religions – Mohammedanism, Christianity and Jewry – in a way so they coexisted in mutual acceptance and harmony. And this land was officially called a desert by the Zionists, for whom the crowded areas and landscapes were filled with people whose existence showed that they did not exist.

And as the Zionists had come to this land and wanted it for themselves, they now haunted the boy who was like any other boy on earth as the non-existing existence he was to them. They wanted to kill him or drive him so far away that for them he would genuinely be non-existent. The moment he and his family and all the other people in the village were gone, they wanted to take over their houses along with everything that was left: their animals, their furniture, their fields, their village, their country. The Zionists wanted all this to be theirs. They wanted it for themselves.

The Name, the Village, the Date

His name was Jamil – Jamil Abu-Kabir.